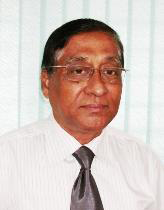 Lt Col Jahangir is an ICON in the security industry of Bangladesh. As mentioned having spent most of his career in the intelligence and counter intelligence assignments when he decided to join private security services, he was the most sought after personality amongst the 500 over security companies in Bangladesh. Elite Force was lucky to have him in its orbit. This is now his 10th year in the Elite Force. He has taken Elite Force to the ‘Zenith’ if one is fair in his assessment to narrate his achievements. Beside his expertise in the field of security. He has gained profound knowledge, in the Labour laws, Compliance, Human Resource Management issues and documentations of profiles.

He has vast experience in preparation of Security Management plan for International / Multinational organizations including Geo Political analysis. He has outstanding contributions in the field of defense security & intelligence organizations. An asset to the organization Col Jahangir is a proud member of ‘Elite Force’.